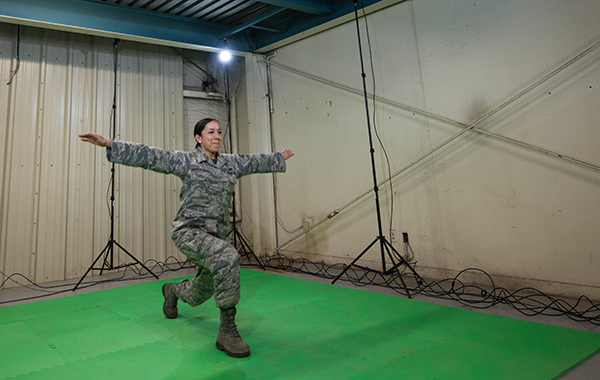 LUKE AIR FORCE BASE, Ariz. – A fighter pilot flies his F-16 towards a bombing target. As he nears it, he toggles the weapons release on his controls and drops his payload. The bomb descends, strikes and destroys its target. Moments later, the pilot pulls a sharp turn at high speed to quickly vacate the area before the enemy can react.

He banks to one side, yanks back on his joystick and pulls seven G’s, applying a centripetal acceleration seven times greater than that of gravity to himself. For a pilot who weighs 175 pounds, this translates into 1,225 pounds of weight compressing him into his seat. This exertion occurs quickly, and places tremendous pressure on his spine, neck, and other joints.

The experience of a high-g turn is strenuous enough that fighter pilots must use special equipment and unique training to squeeze blood from the lower extremities back up into their brain during the maneuver in order not to lose consciousness. A pilot might perform this, and other similarly stressing maneuvers, thousands of times over the course of their career.

“To be an athlete, you have to have strong muscles,” said Capt. Bryan Anderson, 56th Medical Group flight surgeon and Human Performance Team project officer. “If a pilot gets into an air-to-air engagement with an adversary, he may pull his jet up to nine G’s. In order to do that, you have to have very strong lower extremity muscles, abdominal muscles, and glute muscles.”

Aside from their own bodyweight, pilots wear up to 50 pounds of gear and equipment.

“A pilot may be wearing a five pound helmet on an eight pound head,” Anderson said. “At nine G’s, your head is well over 100 pounds. How do you turn a head that weighs 100 pounds? You have to have incredibly strong neck musculature.”

In order to maximize the peak performance of fighter pilots and mitigate injuries as a result of the intense physical demands of piloting combat aircraft, Anderson and other members of the 56th Medical Group have devised a new approach to pilot treatment.

That medical team is the newly formed Human Performance Team, whose goal is to provide high-quality professional healthcare to pilots at a frequency that matches their high-speed pace.

Anderson says the Human Performance Team is composed of the same types of medical professionals found in other high performance medical teams, like sports medicine physicians, physical therapists, strength and conditioning coaches, performance dieticians and others. All of these professionals are at Luke working to effect a curriculum known as the Fighter Tactical Strengthening and Sustainment program.

In addition to academic learning, both student and instructor pilots will perform monthly one-on-one workout sessions with a strength and conditioning coach and receive an evaluation with the HPT’s new state-of-the-art Dynamic Athletic Research Institute marker-less motion analytics machine.

“It has eight cameras that look at you while you perform a series of movements, and then it analyzes every single muscle group in your body in about five minutes,” Anderson said. “It can figure out where you have injuries, where you have pain, where your weak muscle-groups are, and it can predict with high accuracy where injuries will occur. We can then use this information to help train pilots to make sure those injuries don’t happen.”

The team, the DARI machine, and most of the resources needed to operate FiTTS are located at the new HPT facility, the Aviator Center of Excellence, which conducted its ribbon-cutting ceremony at Luke on Jan. 26.

The HPT will also embed healthcare professionals in the fighter squadron operations centers.

“The idea is that the fighter pilot works in the fighter squadron,” Anderson said. “Several times a week, they’ll gear up, get ready, and go out and fly a jet. When they’re done, they change and go right back to work at their desk. Sometimes these guys are really busy, and they don’t have the time to make an appointment to go see a physical therapist. So we’re putting a physical therapist right down the hall from him, no appointment needed, available five days a week.”

Pilot health concerns additionally contribute to the wider Air Force issue of pilot retention. Veteran pilots are leaving the force at rates high enough that the Air Force faces a shortage of more than 2,000 below its optimum requirement.

“They’re really doing this job with their bodies,” Anderson said. “A lot of pilots will think, ‘Hey, I’ve put ten years into the Air Force and my body is really taking a toll. Do I really want to stay in?’”

Programs like FiTTS and other efforts by the HPT hope to combat this mindset both by teaching pilots self-optimization techniques and physical training plans necessary to prevent injury, and by personalizing pilot healthcare to give more attention to treating any maladies that do occur.

“We’re changing the paradigm from that of fixing what is already broken and reacting to the issues that occur, to giving student pilots the tools they need to prevent things from happening in the first place,” said Maj. Roberto Flammia, 56th Training Squadron chief of training development and fighter pilot. “We’re prepping them on how to take care of themselves physically and mentally through the long haul.”

Anderson says the HPT is the tip of the spear of initiatives designed to ensure Air Force personnel are taken care of and placed first.

“That’s why we’re here,” Anderson said. “We provide the services that we do because the Air Force wants to take care of its pilots.” 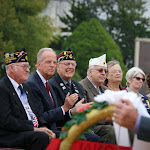 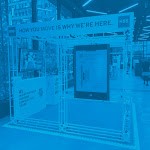 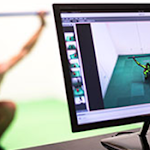